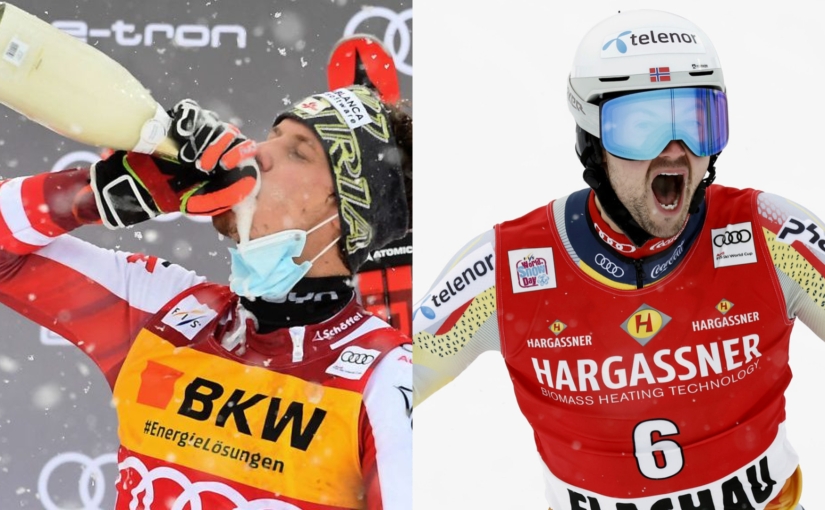 Manuel Feller on Saturday and Sebastian Foss-Solevaag on Sunday managed to fulfill their childhood dreams by winning their first FIS Alpine Ski World Cup races held in the unconventional town of Flachau.

A first for Flachau and a first for Feller and Foss-Solevaag: two different first-time race winners and the first Men’s races taken place in the Salzburg area. After the announcement of the cancelation of the Wengen competitions, FIS first decided to organize the postponed events on the Streif before settling for the slope that just had held the Women’s Slalom contest.

The last-minute Slalom events held in the Austrian town, a destination well known for its Women’s World Cup Slalom race, showcased the diversity and competitiveness of this year’s Crystal Globe contenders. Since the before-Hirscher-era, there hadn’t been such an undecided race to the title.

After Marco Schwarz’s win in Adelboden, Manuel Feller was deprived of the red bib after only one race, having straddled one of the gates in the first run. Only one point separated the two Austrians, the favorites to clinch the Slalom title.

He then bounced back in Flachau’s first race, earning the victory and regaining the scarlet bib he deserved. Clément Noël and Marco Schwarz completed the podium, respectively being 43 and 70 hundredths of a second behind the leader.

Feller ranked third after the first run, only being 0.25 seconds off the pace as, for the third time this season, Clément Noël was the top racer qualifying for the Top-30. Laying down the fastest time in the second run, Feller jumped into first place and held onto victory.

Today’s second-place finish was the first podium for the Frenchman this season. It was still a frustrating result, as he continued to deliver the best performance in the first run but loses out on a better ranking after his second run.

Adelboden-winner Marco Schwarz held onto the podium position, only missing out on a trophy at Madonna di Campiglio’s night race this season. It was the 12th career podium for the Austrian.

Feller was always close to the victory this season, earning two second-place finishes in Alta Badia and Zagreb. In total, it was the sixth career Slalom podium for the 28-year-old.

Sunday’s race was a good pick-me-up for the Norwegian ski team. Lucas Braathen and Atle Lie McGrath’s injuries handicapped the Scandinavians substantially for the Nations Cup race against Austria and Switzerland. Their star skier and last year’s Overall standings winner Aleksander Aamodt Kilde announced his retirement from this year’s title contention as well, suffering a knee injury during a training session for next week’s race in Kitzbühel.

It took 86 World Cup starts, but in the end, he finally got his maiden victory. Norwegian Sebastian Foss-Solevaag dominated the slope in Sunday’s Slalom in Flachau to claim his first career win.

Foss-Solevaag debuted in Levi’s 2012 World Cup event and had four podiums under his belt before his life-changing placement in Austria. The 29-year-old always fell short of victory, but the second Slalom race in Flachau was a clear statement, earning a crushing 0.76 triumph over Austrian Marco Schwarz. Sebastian Foss-Solevaag is finally a race winner.

Schwarz is on a roll of his own, having earned a podium in each of the last three races, including his recent second-place finish on home soil. He is now leading the Slalom standings by 65 points ahead of Feller.

Alexis Pinturault brought home his first top-three finish in a Slalom this season, being 0.95 off the winning pace.

Sebastian Foss-Solevaag skied nearly flawlessly in both runs, setting the fastest time at both attempts down the hill. After the first run, he sat at the top of the standings with Austrian trio Fabio Gstrein, Manuel Feller and Marco Schwarz right on his heels. Only Schwarz managed to capitalize on his strong first run position. Manuel Feller and Fabio Gstrein had no chance to make it into the top ten in the second run.

Austria’s loss was Switzerland’s gain as Loïc Meillard and Luca Aerni respectively finished fourth and sixth. Although the season is only half over, the two countries find themselves already going head-to-head for the Nations Cup, with the Swiss currently holding a 604-point lead.

Leading a ranking is Alexis Pinturault, who, after his back-to-back Giant Slalom wins in Adelboden, clinched the top spot of the Overall standings, with a 218-point lead over injured Kilde. The odds for the big Crystal Globe victory are in his favor.

After an extremely busy two weeks, the Slalom racers can now catch their breath until their next event on January 26th in Schladming. Until then, the speed teams will steal the spotlight in Kitzbühel where the famous Streif races are held next weekend.