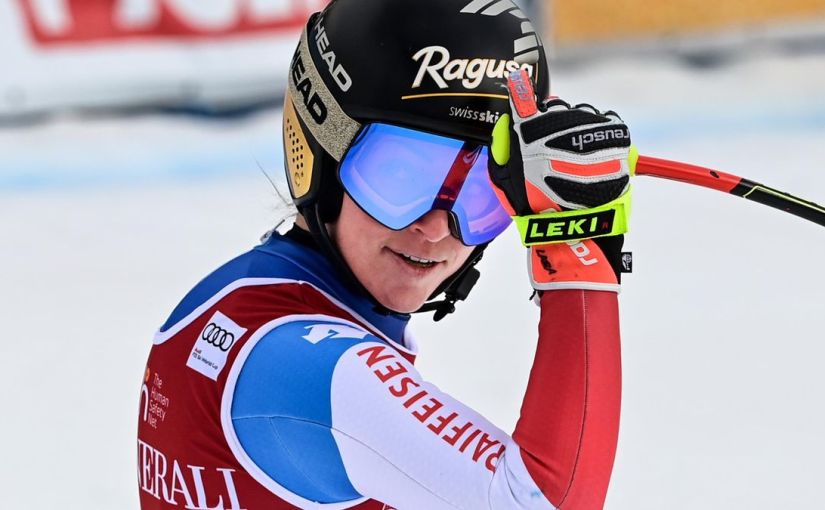 Another day, another victory for Lara Gut-Behrami. The Swiss speed athlete dominated the second Downhill race in Val di Fassa, Italy. The Passo San Pellegrino course, which hosted the 2019 FIS Alpine Junior World Championships, was a replacement for the Olympic Test events in Beijing, which were canceled due to the pandemic.

Back-to-back wins seem to be the “Gut-way” of doing things. She’s completely commanding the Super G standings, with four events out of five won in a row, not to mention her incredible World Championships gold medal in Cortina. Can she recover and conquer the Downhill Crystal Globe as well?

Resilient teammate Corinne Suter managed to score a back-to-back podium result, although improving the position. On Friday’s race, the Swiss speedster earned third place. This time, she was just behind unbeatable Gut-Behrami in second, 32 hundredths off the pace. The reigning Downhill World Champion probably expected a victory from this speed weekend but can still consider herself pleased with the results.

Concluding the top-three, Kira Weidle stood on the lowest step of the podium for the third time in her World Cup career. The German Cortina Downhill silver medalist seemed to be in her best physical condition after her breakthrough on the Olympia Delle Tofane course.

To kick the race off, Elena Curtoni set the time to beat at 1:26.54. Three seconds slower than the winner’s time the day before. Jasmine Flury didn’t have a hard time beating the Italian’s performance. She took over the provisional lead of the race.

Breezy Johnson needed a podium result to still have a chance at the Downhill small Crystal Globe. A too pronounced lean towards a gate on the steepest part of the slope provoked her crashing into the barriers. A mistake that proved to be fatal for Johnson’s standings.

The Swiss Giant Slalom specialist Michelle Gisin seemed to be ahead of teammate Flury throughout her run, posting green intermediates. Only one-hundredth of a second of advantage aided her to dethrone the provisional leader.

2021 Downhill World Champion Corinne Suter blew it out of the park, serving her teammates Gisin and Flury over 49 and 50 hundredths of advantage. After five racers, the competition saw an all-Swiss podium, but Kajsa Vickhoff Lie ended the streak by placing behind Suter in second.

Friday’s Val di Fassa winner Lara Gut Behrami was just on another planet. Her advantage over provisional leader Suter increased intermediate by intermediate. The quality of her skiing was just unlike any other. Only injured Sofia Goggia could have attempted to beat the Swiss speed specialist.

Cortina Downhill Silver medalist Kira Weidle was skiing a clean racing line, but a little bit more aggressiveness was necessary on the Passo San Pellegrino slope. The German managed to recover over three tenths in the final part of the piste, earning a place on the lowest step of the podium.

After the tenth racer, Federica Brignone, the standings were in favor of the Swiss, with all of their athletes placed in the Top-6. The Italians were the worst team on home soil, being respectively all in the last three positions of the rankings.

The best Italian on home soil in Friday’s race, Laura Pirovano, proved to be Italy’s only hope for a good result, placing fifth in ex aequo with Norwegian Lie.

Petra Vlhova, who sees in Gut-Behrami the biggest competition and threat for the Overall Crystal Globe, tried to score a Top-10 finish as an attempt to not losing out on too many points against the Swiss. A 1.29 seconds delay was unfortunately not enough for a good result.

107 points now separate the two contenders, with Gut-Behrami in the lead. Can Vlhova turn the tables around in Jasna, where two technical events (her specialties) will be held? And can Gut-Behrami go home at the end of the season with three Crystal Globes (Downhill, Super G & Overall)? The injured Sofia Goggia has now only a 97-points lead over the Val di Fassa winner and 80 over World Champion Suter. The ultimate showdown will be in Lenzerheide, where the big finals of this Alpine Skiing 2020/2021 season will take place from March 15th-21st. 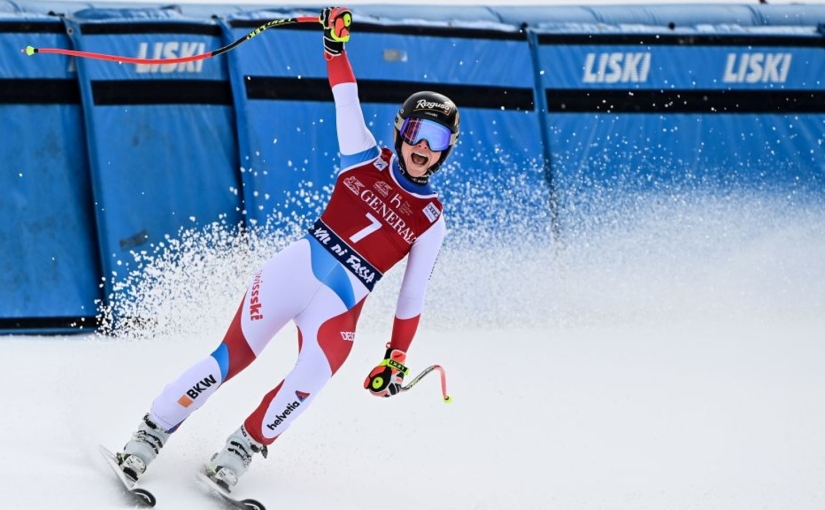 Lara Gut-Behrami proves to be unstoppable on the speed disciplines, especially when considering her most recent results at the 2021 Cortina D’Ampezzo FIS Alpine World Ski Championships.

After the 2021 Cortina d’Ampezzo FIS Alpine Ski World Championships, the World Cup restarted on a new slope for the women in Val di Fassa, Italy. The Passo San Pellegrino course, which hosted the 2019 FIS Alpine Junior World Championships, was a replacement for the Olympic Test events in Beijing, which were canceled due to the pandemic. Nevertheless, the Italian venue proved to be especially fitting to one particular athlete’s characteristics: Lara Gut-Behrami.

The Swiss athlete scored two gold medals (Super G and Giant Slalom) and one bronze in the Downhill event at the Cortina World Championships. The Ticino skier has been virtually untouchable since the beginning of 2021, especially in Super G, at which she won at four out of five events during the season.

Today’s Dowhill event was not an easy win for Gut-Behrami, as she barely surpassed Ramona Siebehofer for the lead. Two-hundredths of a second were enough to assign the victory to the Swiss racer. Placing third was Cortina Downhill World Champion, Corinne Suter who was just 26 hundredths off teammate Lara Gut-Behrami’s pace.

Breezy Johnson, who scored four third places in five World Cup Downhill races, was the athlete kicking-off the race. The time to beat for the competitors was 1:24.77. Austrian Ramona Siebenhofer seemed to race cleaner lines, which helped her increase her advantage over Johnson intermediate by intermediate. With 34 hundredths of advantage, Siebenhofer dethroned the American skier. Cortina World Championships Downhill silver medalist Kira Weidle managed to squeeze between the two racers after her attempt, finishing in second place.

Francesca Marsaglia’s performance was not at her level. The athlete competing on home soil was expecting a better result, but 1.72 seconds from the provisional leader only secured her fourth place.

The new 2021 Downhill World Champion Corinne Suter seemed not capable of interpreting the slope the best way to deserve the lead of the race. 24-hundredths of delay behind Siebenhofer still secured the provisional second spot on the podium.

Speed discipline superstar Lara Gut-Behrami was racing for the Overall World Cup title.  The Swiss was always close to Siebenhofer’s time throughout the intermediates. It was a breathtaking finish, as Gut-Behrami managed to recover over 16 hundredths of a second of delay, finishing 0.02 seconds ahead of the provisional leader.

Former Downhill World Champion Ilka Stuhec, who complained ahead of the race about the easiness of difficulty of the Italian slope, was doing well ahead of the first intermediate. A mistake, although, ended her chances of winning.

Giant Slalom dominator Marta Bassino was setting the worst intermediates of all the athletes. The Italian superstar seemed not to be in her best mental shape after the criticism she encountered following the Cortina Giant Slalom flop. A 2.18-second disadvantage placed her in last. On the contrary, teammate Laura Pirovano, who placed seventh after her run, was the best-placed “Azzurra” of the competition on home soil.

Petra Vlhova, Gut-Behrami’s main challenger for the Overall title, was doing well in the first half of the race. Keeping up with Lara Gut-Behrami is never an easy task and being 1.12 seconds behind the Downhill giant was already an impressive accomplishment for the Slovakian.

Thanks to this victory, Lara Gut-Behrami took over the leadership of the Overall standings, with over a 29-points lead over Vlhova, whose ninth-place was not enough to keep her in the lead.

As far as the Downhill standings concern, Sofia Goggia maintains the leadership over the standings, even though her injury prevents her from competing. The Italian skier was dominating the Downhill season when a fatal mistake in Garmisch-Partenkirchen’s Super G cut her winning streak short. It also prevented her from participating at the World Championships on home soil, where she would have undoubtedly scored a good result.

The races at the Passo San Pellegrino will continue with another Downhill race on Saturday and a Super G on Sunday, with Lara Gut-Behrami as a favorite to win them all. As the season comes to an end, the race to earn the Crystal Globes becomes tighter and even more exciting for the viewers. Who will come out on top?