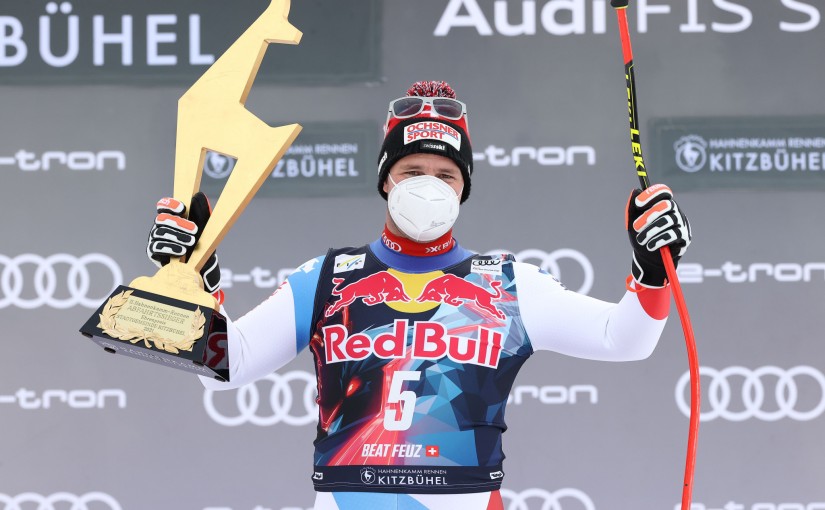 Beat Feuz wins the second Downhill event on the Streif in Kitzbühel and earns the red bib for the next race in Garmisch-Partenkirchen. He’s the seventh skier to win the Hahnenkamm event twice in the same year. The last one was Luc Alphand 26 years ago.

It’s all or nothing for Beat Feuz. The Swiss Downhill specialist gets crowned for the second time in a row the Hahnenkamm race king. He now will wear the red bib during the last speed event before the Cortina D’Ampezzo World Championships in Garmisch-Partenkirchen.

Triumphing on the most dangerous and nerve-wracking race of the season once wasn’t enough for Feuz. He had to score record-breaking results. He’s the seventh skier to win the Hahnenkamm Downhill race twice in the same year. The last one was French ski legend Luc Alphand 26 years ago.

Johan Clarey and Matthias Mayer completed the podium of the second Kitzbühel speed event respectively 17 and 38 hundredths of a second behind leader Feuz.

The Hahnenkamm-race is the most dangerous and exhausting Downhill race of the whole FIS Alpine Ski World Cup. Every year the best skiers on earth compete to win the coveted chamois trophy, the symbol of Kitzbühel. You need to have a strong gut to try to ski down the Austrian slope. The start of the race alone, the Mäusefalle, has an 85% steepness. Most competitors fly several meters in the air before reaching the end of that section. Athletes cross the finish line with an average speed of 145 km/h. Only the best can conquer and win Kitzbühel.

The weather conditions that caused the first Streif event to be broken-off and the second race to be postponed to Sunday were present at this competition as well. Visibility was worse than on Friday. The slope was icier too, but the money prize was more substantial. The winner of the Streif earned 90.000 Swiss Franks.

Bib-number-one-holder Maxence Muzaton set the bar for the next competitors to reach with a 1:57.23. Travis Ganong was the first to challenge the French. Intermediate by intermediate, the American increased his advantage to Muzaton and crossed the finish line 56 hundredths of a second ahead.

Romed Baumann, who had a season’s best result placing 8th on Friday, beat Ganong to the fastest time. The Austrian competing for Team Germany is a contender for a World Championship medal in Cortina.

Johan Clarey, who had a terrible crash during the first training session, seemed to have learned his lesson. His advantage to Baumann at the finish line were a whopping 80 hundredths of a second. An incredible run by Clarey, who turned out to be the oldest skier on a podium at 40 years of age.

Christof Innerhofer, the Italian Downhill skier, struggled in the first Hahnenkamm-race. This time, the South Tyrolean impressed with his aggressiveness on the skis and managed to squeeze in between Clarey and Baumann. Innerhofer is back and here to stay. He and Paris are the top contenders for Italy to score a medal in the World Championships on home soil.

Kjetil Jansrud, who only finished 18th on Friday, seemed not to be in his best shape, crossing the finish line with a 2.29-second delay and placing provisionally in sixth place. He then ended in 26th place in the final standings.

Right before Beat Feuz, the winner of the first Streif event, began his run, the weather conditions worsened. The race was momentarily interrupted. As the event resumed, the bib number 9 athlete started with a bang. Setting green intermediates right from the get-go was a good indicator for what was to come, but he then lost momentum in the middle part of the slope. After that, Feuz started his comeback to end the run with a 17 hundredths advantage ahead of Clarey.

Dominik Paris, the beloved South Tyrolean ski star, scored his first seasonal podium in the first Kitzbühel race. He was hungry for more and wanted a back-to-back Top-3 result. 1.18 seconds separated Paris and the provisional leader at the finish line, ranking in seventh place. It was still a good Downhill result for Dominik, who has a shot at winning in Kitzbühel at the Super G race on Monday.

Matthias Mayer, the runner-up of Friday’s Streif, gave Feuz a tough time with minimal margins of difference between the two. He ended scoring only third place.

The Austrian speed team seemed to be on fire, with Max Franz challenging his teammate Mayer for a podium position. Vincent Kriechmayr took a colossal risk, which unfortunately didn’t pay off. He was very unlucky. A gate loosened as he was riding the snow downhill at 130 km/h. It fell right on the binding of his skis. If it had gone underneath, he could’ve had the same end to his run as Ryan Cochran-Siegle. The American crashed on Friday into the barriers. After a physical assessment at the local hospital, the doctors discovered a mini-fracture in his cervical spine.

A surprisingly good performance was done by Marco Odermatt in Kitzbühel, who could not start his run on Friday due to the weather condition. The only remaining challenger for the Overall Crystal Globe was striving for a points finish and got something even better: a Top-10 result.

The speed athletes will prepare themselves for another daunting race on the Streif. Monday’s Super G will be a playing factor for the athletes’ convocation to the Cortina D’Ampezzo World Championships. Who will succeed?