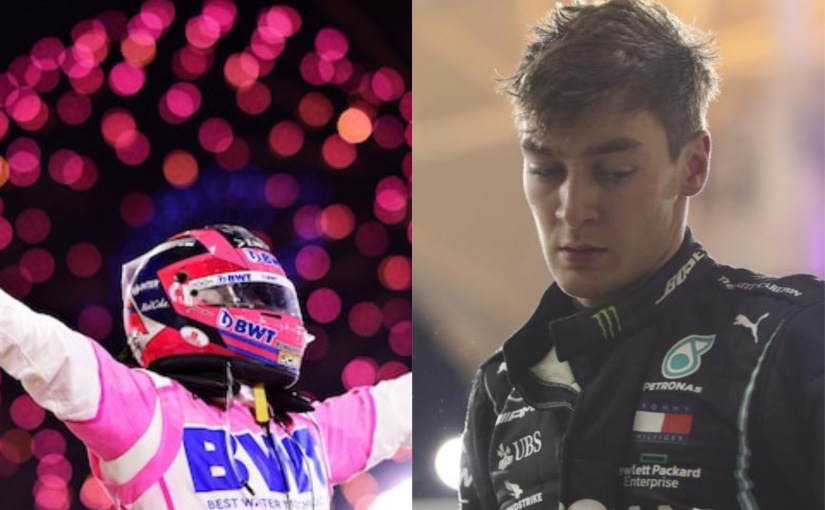 Sergio Perez won the Sakhir GP after being involved in a first-lap incident and having to recover from P20. Will his performance convince Red Bull to give him a seat for 2021? George Russell dominated the race, but a fatal mishap done by Mercedes put an end to his victory hopes.

Checo Perez’s maiden victory feels like revenge. After being kicked out of Racing Point (former Force India, which survived a financial crisis thanks to him) and being replaced by Sebastian Vettel, even though he was under contract until 2023, the Mexican proved to deserve a seat in Formula 1. Why did Racing Point even consider ending Perez’s contract after all he did for the team? Why did Vettel not take Stroll’s place? Why did Racing Point not choose the strongest driver lineup they could possibly have?

The answer is easy: Lance Stroll is the son of team owner Lawrence Stroll. Even though the Canadian proved to be in good shape this season, being awarded third place in Monza and Bahrain at the Sakhir GP, as well as a pole position in Turkey, he can’t even come close to what Checo has achieved. He was the runner-up at the Turkish GP and almost earned a back-to-back podium last week in Bahrain if it wasn’t for his Mercedes engine failing on the second-to-last lap.

Are other teams interested in signing him? His options are only two: Red Bull offering him Alex Albon’s seat or taking a sabbatical.

Formula 1 can be cruel and unfair. That is the case for Checo Perez. Helmut Marko and Christian Horner will have to rethink their driver lineup after today. The Mexican deserves to stay in the circus. They would be insane to keep Albon after the disappointing season he had. Yes. He did get on the podium two times this season, but his consistency can’t compare to Perez’s.

It’s time for Red Bull to look outside of their driver pool and give Max Verstappen a challenge. If they really want to be a championship contender next season and finally end Mercedes’s winning streak, the Mexican is the answer to their dilemma.

There were talks already between Horner and Albon, which, in the case of Red Bull signing the nr. 11 driver, would become the Austrian Formula 1 team’s reserve driver, which is probably what he deserves anyway. The call the Thai driver got to the top, replacing Pierre Gasly at Red Bull, was premature.

A sabbatical could mean the end of Sergio Perez’s career in Formula 1. Nico Hülkenberg, another racer rejected by the circus, portrayed his qualities, jumping in for Checo when he tested positive for Covid-19. Still, he didn’t get any offer to drive for a team next season.

On the other side, George Russell, which replaced Lewis Hamilton in his W11, proved to deserve the promotion to the championship-winning team. After qualifying second, only 0.026 behind teammate Valtteri Bottas on his first drive in the new car, the Brit had a brilliant start overtaking the poleman to take the lead of the pack, an unusual scenario for the Williams driver. His dominance was unthinkable. Russell started from the dirty side of the track, which usually disadvantages the drivers that qualify as an even number.

At some point, I was wondering if Hamilton was driving the car. Russell’s pace was unmatched. Lap after lap, the Brit proved consistently to be faster than Bottas, opening the gap to the Finn to three seconds in twenty laps. His first tire change advantaged him substantially, even though there was a scary moment when his Mercedes lost power, a sensor problem that thankfully got easily fixed.

What changed the Brit’s fate was the double pit-stop that the Mercedes mechanics didn’t manage well. Russell stopped first, but due to an oversight of the team, the tires that were mounted onto his car weren’t the correct ones: he was driving on a set of mediums that belonged to Bottas. The Mercedes mechanics soon figured the mishap out. Instead of following the same mistake with the Finn’s car, they just remounted the same tire he used for his previous twenty laps. What a mess.

Due to the incorrect tires that were fitted onto the W11, the Mercedes Junior driver had to pit once again to not have to undergo a penalty. Russell lost the lead of the race and found himself behind the nr. 77 driver in 5th place, although on a fresher set of tires. He quickly swept through the field to regain his merit, but the odds were not in his favor. A rear-left puncture forced the former Williams driver to switch to another set of tires and to work his way up the field from P15. What a pity.

Although Lady Luck wasn’t on George Russell’s side, he demolished the drivers ahead of him, finishing the race in P9.

Fate was on Perez’s side today, but both drivers deserved the win. What does the future hold for the two drivers? Will Checo stay in Formula 1 next season? In my opinion, he deserves to be part of the pinnacle of motorsport.

Will Russell get the call up to Mercedes for 2021? Not likely, but he proved the whole world to merit to drive in Formula 1 and for a top team. George is a brilliant driver and can withstand the comparison to other youngsters like Max Verstappen and Charles Leclerc. They are the future of racing.